Bitcoin:  "Expiration week" certainly lived up to its expectations, with bitcoin grinding lower towards the "max pain point" of $44,000 for the March contracts all the way to expiration time. [The max pain point is the price point that would cause the most financial loss to all open contracts at expiration]. 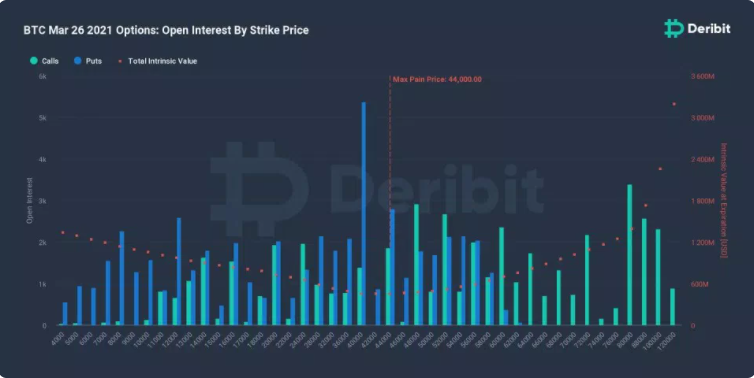 However, it didn't quite get to the max pain point - the weekly low was $50,360. The market started recovering with 4 hours left to contract expiation time on Friday (at 08:00 AM UTC), and while Bitcoin continued regaining ground over the weekend, it still closed the week lower by -2.7% at  $55,790. 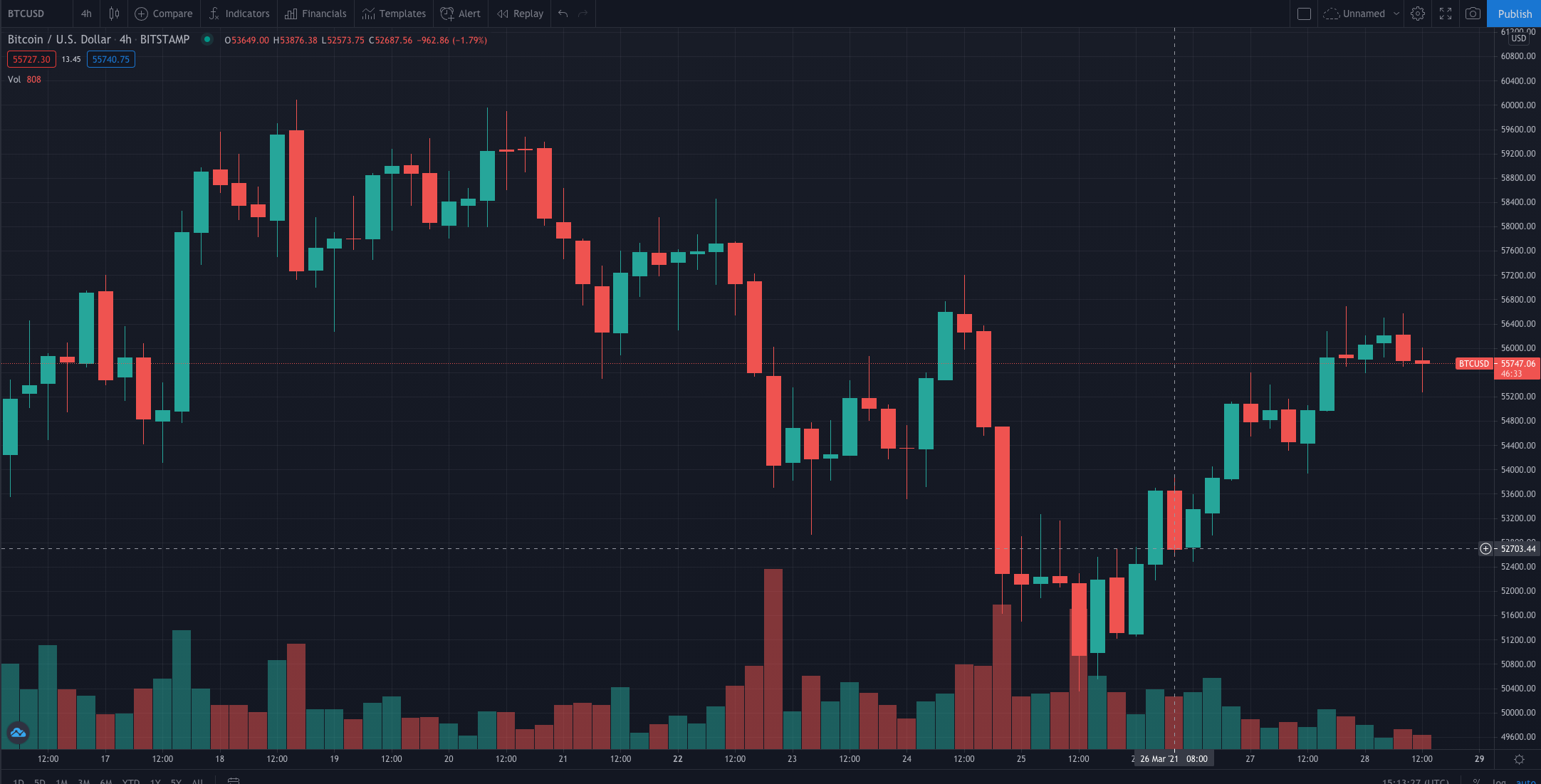 Stepping back for a macro view, as far as bitcoin is concerned the directional trend of the U.S. money supply is clear, regardless of main-street inflation. The Fed and the U.S. Government will spend as needed to stimulate its economy. As we covered here a few weeks ago, more details are starting to surface about a new $3 Trillion Infrastructure stimulus package that is being prepared by the Biden administration.

With the continued stimulus and economic indicators already pointing towards to a recovery, there is an interesting interplay between main street inflation and U.S. Treasury yields - both affect the "real" rate of return. This is giving rise to very interesting dynamics in the markets - impacting the U.S. dollar, and could ultimately impact bitcoin prices. We will dive deeper into this in our What's Ahead section today.

In the bitcoin options world, while we are still far away from April 30th, we see a large block already building in the $80k strike price on the call contracts strike, with the largest block of put contracts in the $50k strike. On the perpetual futures funding rates, we see that they are positive across major exchanges and still above their 30-day moving averages - this could signal potential volatility going into the week.

S&P 500:  Treasury yields took a breather this week and we saw a small reversal from the inflationary trade back to Tech. This may have also been influenced by the narrative of rising infection numbers along with vaccinations - which challenges the "fully opened economy" view for this summer in the U.S..

The S&P 500 had its highest weekly close ever at 3,974 - up +1.68%. The Dow Jones also closed the week higher by +1.36% - also it's highest weekly close ever. But the big winner of the week, as we mentioned, was the Nasdaq - up +3.42% for the week - to a new all-time high of its own. Commodities like oil and copper have been on a 3-week decline pattern, and they were also held down this week by a rising dollar - up +0.92%. The dollar has been getting stronger since the year started - which can have far-reaching consequences. We will touch on this in our What's Ahead section later today.

We get unemployment data this week, which the Fed follows closely to guide its interest rate decisions. The markets will be following closely and so will we. The unemployment rate in the U.S. has been trending downwards with the last read in February being 6.2%. Last week saw a larger than expected drop in unemployment benefits - which could translate to a meaningful improvement on Friday's upcoming numbers. This would be consistent with the expectations of the Fed.

This backdrop, along with continued conversation around the potential new $3 Trillion infrastructure package, should bode well for the markets, and in particular, the "inflationary trade".

Gold: Gold gave back -0.80% last week to close at $1,730/oz. This was consistent with a rising dollar - which brought down prices in commodities like copper and oil for the week as well. Interestingly, lots has been discussed on how the current block of the Suez canal could impact commodity supply chains - however, even that was not able to jolt them into positive for the week. The weight of a rising dollar was too much to bear.

Interestingly, as we pointed out last week, gold prices have been inversely correlated to real long-term rates. This week saw a drop in Treasury bonds yields, meaning the real return for treasuries was under pressure as well - but counterintuitively, gold prices did not rally.

DeFi: The DeFi index took a beating last week, closing the period down -8.70%. It underperformed both bitcoin and ethereum to the downside for the week (by a long-shot). As we discussed in last week's issue, this type of behaviour is not surprising, and consistent with the end of the commentary period for the potential FinCEN law to regulate digital asset transactions - the deadline for additional commentary is today.

As drafted, this rule will be most impactful to DeFi protocols, most of which do not conduct KYC processes for their participants or follow AML policies. The market will certainly be on its toes as it awaits further developments on this front. While extending the commentary period _again_ may "keep the party going" for a bit longer, there is a good chance that the U.S. looks to move forward with a version of the proposed law, and a lot will depend on the specifics of the same. Looking at the ethereum options market, there is a disproportionately large open interest in the Ether put option contracts for April 2nd expiry at the $1,440 strike price. Something to consider going into the week.

Difficulty Commentary: Hashrate has soared since last week - with the next adjustment currently signalling an increase in difficulty of +5%. The next adjustment may come in this Thursday evening, a day earlier than usual, and should bring us to a new all-time high of 22.98 TH.

Looking at the mempool, things seem to be getting slightly better. The size has come down quite a bit, but transaction times still remain longer and more expensive than usual.

With contract expiration week behind us, the elephant in the room for the coming week is the end of the commentary period for the FinCEN law, which happens today (Monday). This means we will likely be hearing about updates - or perhaps a further extension to allow for more comments. Any headline around this will certainly move the markets.

On the macro side, Treasury yields were down for the week after moving higher for 8 consecutive weeks. They seem to have found buyers at these levels (driving bond prices up and yields down).

While some market commentators have highlighted the lack of foreign buyers for U.S. Treasuries recently, this may be about to change. As we have noted, treasury yields are rising faster than inflation indicators. This means that the real return of treasury bonds is becoming "less negative". The "real long term rate" for the 10-year note, as per the Fed, started the year at -0.50% and is currently at -0.06%. This could be what is driving more investors to buy dollars - perhaps in anticipation of positive real yields in U.S. treasury bonds. The U.S. dollar has been rising since January this year - which is exactly when the yield on the 10-year note broke out as well.

A rising dollar could damper the Fed's domestic inflation plans. One tool that the Fed could use to discourage dollar demand is to artificially keep treasury yields lower - this type of action is known as "yield curve control". It is already being implemented in countries like Australia and Japan.

We will dive into this deeper in our next issue of the Bitcoin Economic Calendar. How could this impact bitcoin? You can think of "yield curve control" as a way of forcefully trying to bring down the attractiveness of owning U.S. dollars by altering the economics of earning a positive real rate from the most secure bond in the market. While the Fed can do this by artificially keeping the yields of these bonds down (by being themselves the buyers of said bonds), it has a harder time unwinding the effect of its policies on assets like Bitcoin. In other words, the Fed can try to put make-up on some of the problems created by its monetary policy to drive certain behaviours - but it cannot change the fact that it is pouring more "units of money" into the money supply and that eventually, that should drive up asset prices.

Big week coming up, as always, we'll keep you posted on any relevant news throughout the week right here and from our Twitter account @hodlwithLedn