Not yet a Ledn client? Start earning 12.25% APY on your USDC and 6.10% APY on your Bitcoin - click here to open your Ledn account!

HOW TO CHECK YOUR PROOF-OF-RESERVES

If you are a Ledn client and had a balance on January 31st, 2021 at 11:59 PM EST, your balance was automatically included in the Proof-of-Reserves attestation. Your Ledn dashboard will display your hashed user ID, and a URL link to the Armanino TrustExplorer, where you can enter your hashed ID and verify that your balance was included in the Ledn Proof-of-Reserves report. You can also download a full copy of the report on the Armanino link.

Bitcoin:  Another neck-breaking week for Bitcoin, getting to within $300 of $50,000 before closing the week up 25% at $48,886 - on what will likely be referred to the Musk/Tesla rally in the years to come.  We will discuss the long-term implications of this in our Whats Ahead section today. While it did not make headlines this week, another very important figure in the establishment started becoming more vocal about Bitcoin. We're talking about none other than Thomas Lee, Managing Partner and Head of Research at Fundstrat.

Mr. Lee is one of the sharpest minds in the fund management world and has been consistently accurate with his calls. He even went on to retweet a funny bitcoin meme by Meltem Demirors, tacitly calling for $250k Bitcoin.  His research team also touted that "For fundamental reasons actually, you could see a number of corporate buyers taking positions in … crypto more generally". 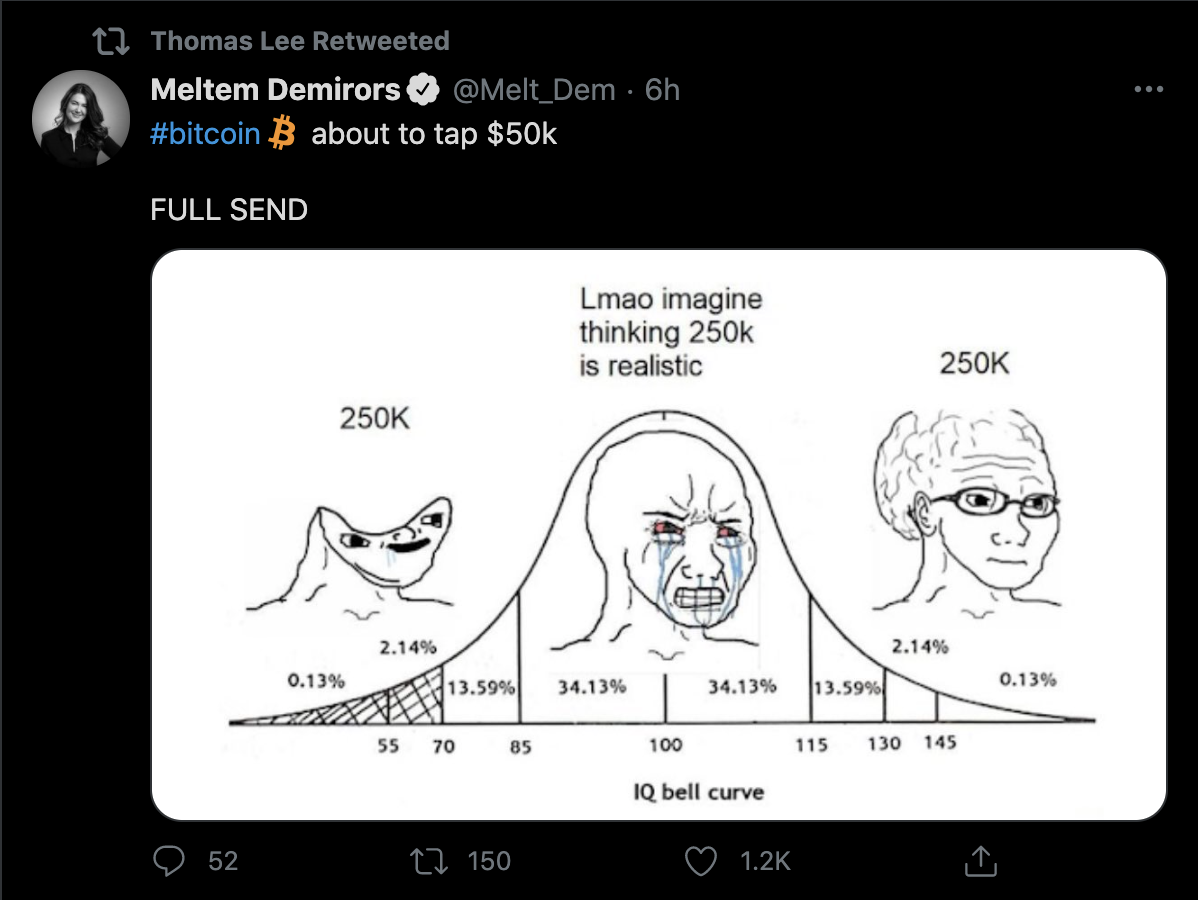 Elsewhere we saw that BNY Mellon, the oldest bank in the United States, announced its plans to custody Bitcoin. This is a big signal for the banking "establishment" - and likely to cause more dominos to fall in the same direction. We also saw Miami Mayor Francis Suarez fully embrace Bitcoin in a public statement proposing an initiative that would allow city employees to get paid in Bitcoin and for it to be accepted as a means of payment for city taxes - paving the way for the city to hold it in its reserves. As a last interesting signal, we wanted to share a tweet by Willy Woo where he pointed out that there's been an inverse correlation between Bitcoin and Gold since the Michael Saylor announcement. We've discussed at length here why that's meaningful, but just a reminder, Gold is a market that is 10X the size of Bitcoin. 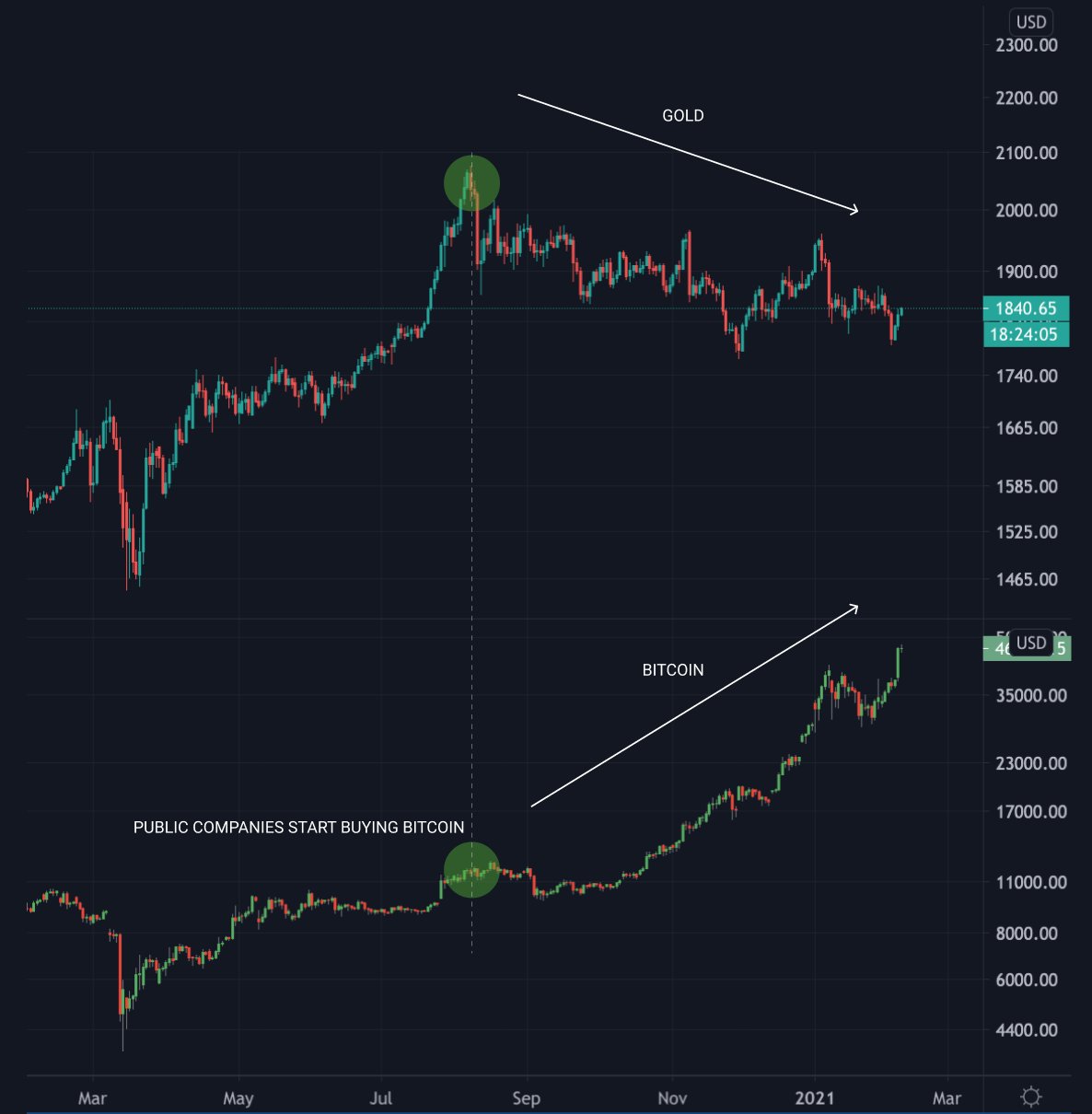 We'll also discuss what the options markets are showing for Bitcoin's February 29th expirations along with the futures markets in our Whats Ahead for the Week section below.

S&P 500: U.S. Equity markets reached another all-time high on the back of fiscal stimulus expectations. President Biden is set to announce a package that could be up to $1.9 trillion dollars. This has sent markets roaring with 51% of professional fund-managers surveyed expressing that the package had the risk of "doing too much". In other words, more professional investors believe that the biggest risk is to "over-heat" the economy rather than the package not doing enough. This is consistent with the 10-year treasury yields we are seeing - they have not stopped rising after breaking 1%, currently at 1.21%. We'll talk about this in more detail in our What's Ahead section.

Gold: The renewed expectation for the trillion-dollar stimulus package out of the U.S. government was enough to push the dollar index lower and gold higher for the week. Gold closed the +0.56% higher with the DXY dollar index closing -0.61% lower. Although subtle, we do see that gold seems to be lagging on the way up and accelerating on the way down. This trend may continue as investor eyes tend to shield their portfolios to protect themselves from the new cash injection. Even commodities like oil and copper are up around 5% respectively for the week and show no signs of stopping.

DeFi: Yet another monster week for the FTX DeFi index with strong volume - closing the week up 15%. Ethereum also had a strong week, up 11.66% at $1,805 on the back of the ETH futures trading on the CME. As we've discussed here in the past, the main risk could have potentially faced DeFi - which was the regulatory action by U.S. Treasury, was blocked by the Biden administration and that has re-sparked the fire of investors and founders alike. While there continue to be flash loans and liquidity drains like the recent $37.5 M exploit of CREAM, retail investors seem are willing to take the risk.

The institutional validation of the Ethereum futures is likely also playing a factor as the ecosystem built on top of it continues to flourish. The trend shows no signs of stopping any time soon. Signs of excess in the market continue to abound, as exemplified by XRP trading at pre-enforcement action levels, and Doge coin up over 400% in the last 2 weeks. These markets move very fast - be careful out there, friends.

Hashrate has continued to pour into the network and the next difficulty adjustment is set to take us to a new all-time high to approximately 22.32 TH from the current 21.34TH. The surge in hashing power has been quite significant, and the next adjustment will likely kick in ahead of schedule this coming Friday evening. While blocks are being produced in intervals under 10 minutes, the mempool size is still at very high levels. To put it in perspective, we are about 69,500 million bytes of the way from the 2017-2018 peak of 136 million bytes. In its "normal" state, running up to 30 million bytes would be considered "congested". This means transactions will still be slightly slower than usual to process and more expensive to transact - plan your transactions accordingly.

Back in September 2020, Michael Saylor announced the first Microstrategy purchase and said that it would take a similar company 6-12 months to complete a purchase. We noted that week that we would likely start hearing about allocations 6 months after Mr. Saylor's purchase. Tesla took 5 months. Tesla's announcement is not likely the first of many in the month or 2 to tome, but it is likely to kick off another Saylor-style round of conversations around corporate treasury boards. Similar to Saylor, we can potentially expect a new wave of future announcements in mid-summer 2021.

The new potential USD $1.9 trillion package from the Bide administration will certainly have investors minds shifting back to the melting purchasing power of their cash balances. This can potentially keep most driving most USD-denominated markets higher, and keep creating GameStop and Doge-like dislocations due to the pent up demand for portfolio returns across retail investors - as well as institutions. Parallel to this, we continue to see gold underperform most asset classes in relative and absolute basis. This cannot be understated as it is an $11 trillion dollar showing signs of continued rotation out of it.

On the Futures front, we continue to see a healthy contango on the curve with the June futures topping at $50,885. On the February 29th options contracts we are seeing strong open interest in the $48k level and the $60k level. It is worth pointing out that volatility on the near and far-dated bitcoin options contracts is trading well north of 100%. To put it in perspective, the implied volatility on the SP500 is about 17%. The funding rates on the perpetual swaps for Bitcoin and Ethereum are well below their 30 day averages for Bitcoin and Ethereum, meaning that investors in those assets do not seem to be too "over-levered" - this is typically a healthy sign.

As always, we'll keep you posted on any relevant news throughout the new year right here and from our Twitter account @hodlwithLedn