Not yet a Ledn client? Start earning 12.25% APY on your USDC and 6.10% APY on your Bitcoin - click here to open your Ledn account!

Bitcoin:  Another record-breaking week for Bitcoin, reaching a new all-time high of $57,489 - up 18% for the week. The week saw many positive developments, including the launch of the first Bitcoin ETF in Canada and breaching $1 Trillion dollars in market capitalization (after crossing the USD $53,700/BTC mark). We will be talking about the potential implications of both in our What's Ahead section later today.

Separately, we also saw Musk speak out about Bitcoin In a response to a tweet from Bloomberg. Musk described having some bitcoin as "adventurous enough for an S&P 500 company." Elon himself has come a long way in a short time - not too long ago he was openly asking Michael Saylor on Twitter whether it was practical to purchase Bitcoin in large amounts.

Beyond the Twitter chatter, Musk's purchase has promoted a flurry of mainstream media articles that are feeding the "Bitcoin is digital gold" narrative. As an example, Canada's CBC published the article below.

Taking a view from the macro world, we see another telling sign of how Bitcoin's price action is related to investor's inflation expectations. Let's take a look at the graph overlaying Bitcoin with the yield on the 10-year U.S. Treasury note. 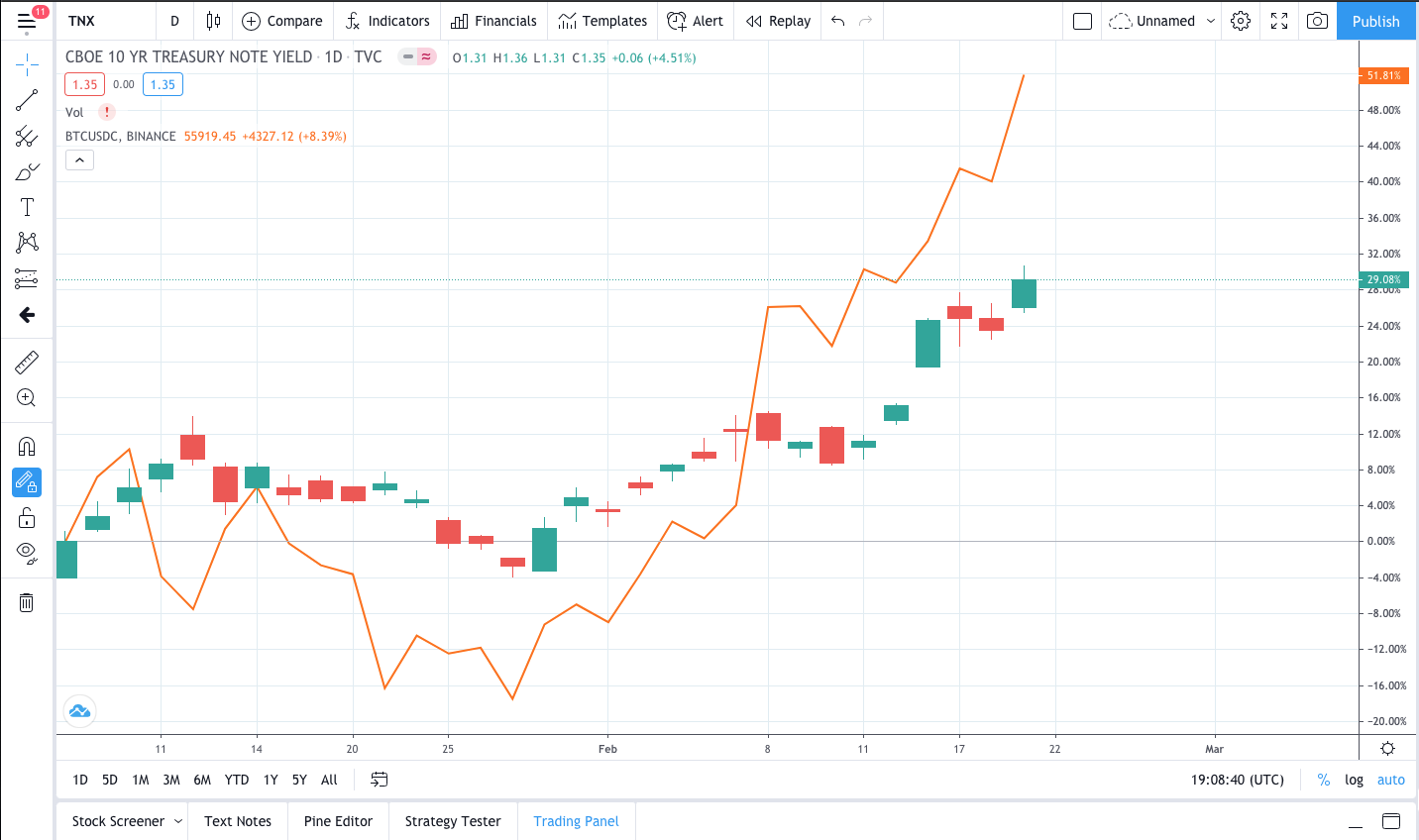 We can clearly see that they are both directionally correlated - with Bitcoin's moves being much more amplified. This is very meaningful as the 10-year Treasury note yield is widely perceived as an indication of the return that investors demand to protect themselves from inflation. We'll dive deeper into the 10-year note yield in the following section and what we're seeing in Bitcoin Futures, Options and Perpetual swap funding rates in our What's Ahead section.

S&P 500: The S&P 500 took a breather last week closing at 3,701 down -0.71% - but the Dow Jones Industrial 30 index and the Nasdaq both made new all-time highs of their own. There was an interesting dynamic at play with the yield on the 10-year treasury note spiking 12% higher to 1.35%, with analysts predicting it could continue to climb. This is consistent with what we have been covering here and - as we have discussed, the yield on the 10-year note is seen as a proxy for corporate borrowing costs and inflation, which can lead to headwinds in equities. Particularly those who have large debts to service.

Looking ahead to this week, President Biden's $1.9 T stimulus heads to Congress this week where it is expected to pass but could face some headwinds in the senate where the democrats need every single seat in their party. Two democrat senators have voiced their opposition to one element of the plan - raising the minimum wage to $15/hour. For reference, current minimum wage in the U.S. is $7.25/hour - meaning the proposed increase would more than double the current rate between now and 2025.

This conversation has certainly fuelled the future inflation potential narrative which has lead to the yield on the 10-year note spiking, and pushed the dollar index slightly lower for the week.

To touch on the dollar for a second - experienced FX professionals like John Glover and Lyn Alden continue to point out the potential for a multi-year down-cycle for the U.S. dollar. We saw just before this how it could play out long term with the yield on the 10-year note. 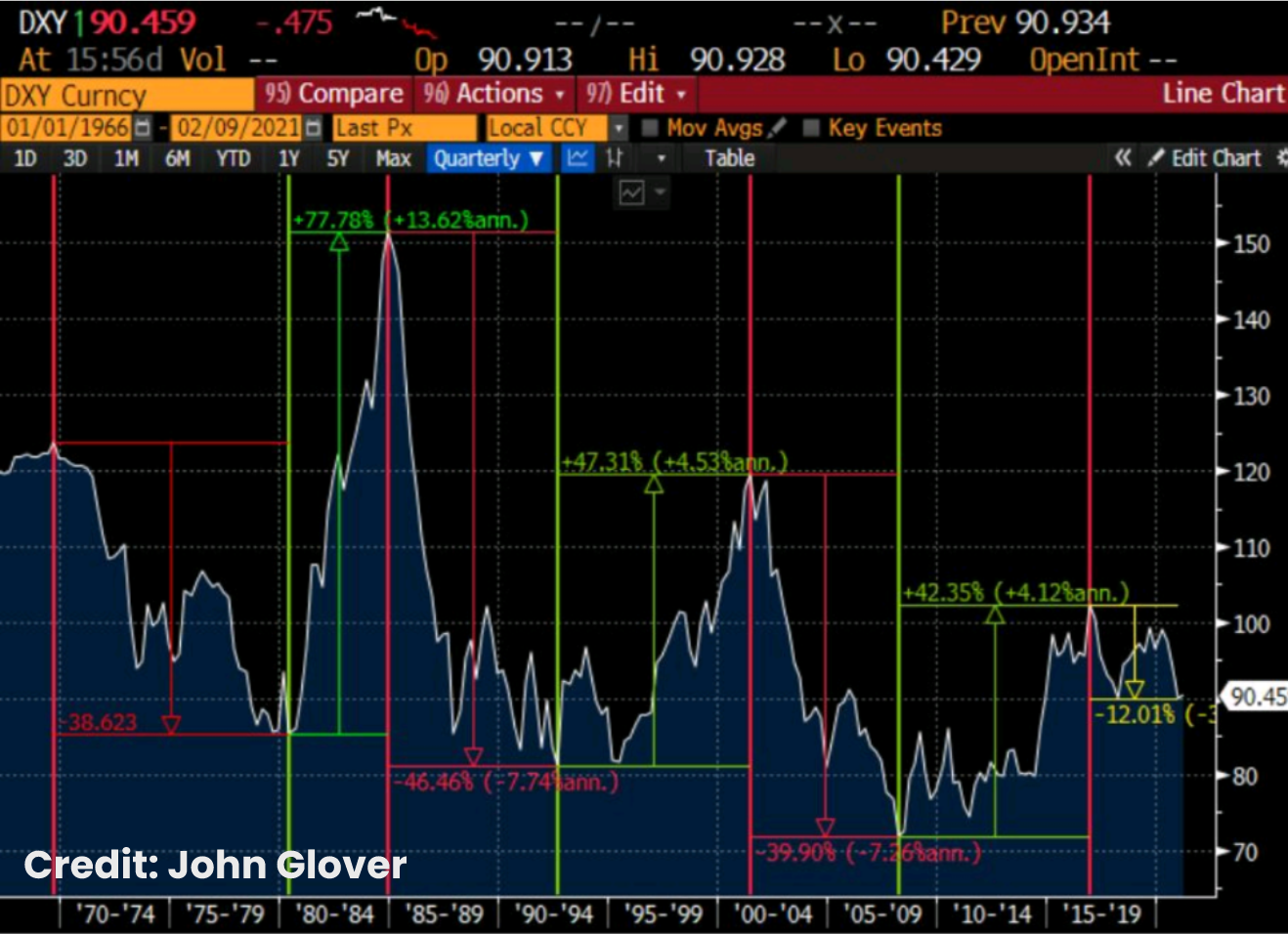 Gold: A falling dollar, and a spiking 10-year note yield were not enough to push gold higher last week. The signs continue to mount that Bitcoin is soaking the air out of the room in the inflationary hedge side of portfolios.

Looking at the graph, the chart feels "heavy" with gold breaking a key support level last week - the next support level on the downside would be $1,725/oz - which represents approximately a 3% drop from current levels. We'll see if the potential of the new stimulus bill passing the house vote this week is able to jolt some life back into gold - at this rate, the potential for that seems low.

DeFi: Not much news on the DeFi front last week, but that didn't stop the FTX DeFi index from reaching a new all-time high, up +10.98%. Ethereum also had a stellar week up 7.27% at $1,935 - but unable to close the week above the all-important $2,000 mark. A positive sign in the Ethereum markets is that the CME's first week of futures saw an average daily volume of $34 million in contracts - equating to $160 M for the week. Importantly, the volume levels from the first day were sustained throughout the week - a sign of not just pent up demand, but ongoing usage of the instrument by market participants.  And even more interestingly, 27% of the volume came from participants outside the U.S. 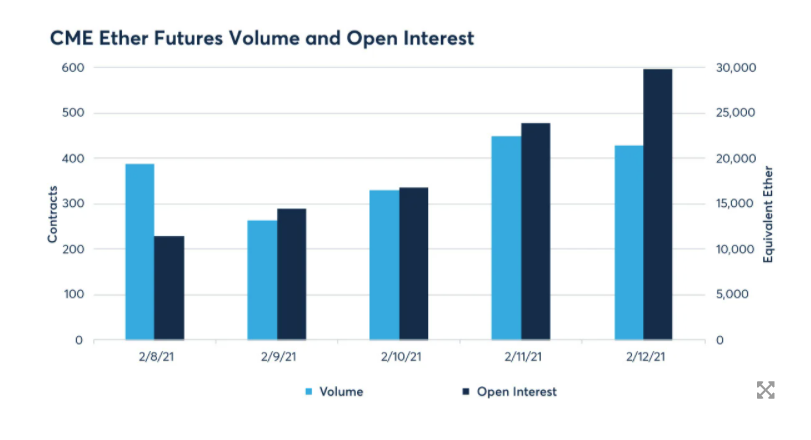 The most recent difficulty adjustment on Friday took us to a new all-time high of 21.72 TH, up +1.35% for the epoch. Hashrate has been stable since the adjustment with no major change yet projected for the next adjustment. The mempool is still at relatively high levels as it tends to be during significant price moves. The high-fee environment will likely continue for as long as Bitcoin's price remains volatile. For some context, the block reward for each new block is currently 6.25 BTC, and fees are averaging 0.83 BTC in addition to that. That's over 7 Bitcoin in rewards for miners in each block (or every 10 minutes).

There were 2 massive market events this week that will have long-term implications. First, the first Bitcoin ETF in North America began trading in the Canadian market. ETFs have faster creation and redemption mechanisms than closed funds (like the GBTC and 3iQ), this means that their prices can trade closer to the underlying asset. Investors looking for price exposure to the asset tend to prefer whatever is tracking price the closest. As an example, the GBTC premium to spot, which historically has traded at around 17%, closed the week in the single-digits. Second, Bitcoin reached USD $1 Trillion in market capitalization - this is very meaningful because there are certain market participants, such as pension and endowment funds, that cannot invest in asset classes that are under USD $1 Trillion in market capitalization. Meaning - Bitcoin now ticks the investment box of the largest class of capital allocators in the world. They will "dabble" sooner than later.

Zooming into the week ahead, we are heading into contract expiration week for the February Bitcoin futures contracts and Bitcoin options on Friday the 26th - expect volatility. On the CME futures contracts (as of Friday's close), we are seeing some selling pressure in the far end of the curve with the July contract trading at $59k just below the June contract at $60k. Interestingly, on the options front we see about 1,400 contracts of opten interest in the $60k contract and over twice as much open interest in the $64k strike. This makes the $60-64k price range an interesting one to watch leading into Friday.

Diving into the 10-year note yield, analysts from Bank of America think the yield on the note can still go higher before it starts causing headwinds in equity markets. They reference 1.75% as a key level - from the current 1.35%. That's about 23% more to go. During the year 2021, Bitcoin has had beta correlation with the 10-year Treasury note of 1.67, this means that a 23% move on the 10-year yield would equate to around a 38% move for Bitcoin. For context, that would be the $78-$80k price range for Bitcoin.

As we inch closer to the 6-month mark after Microstrategy's first Bitcoin purchase, and with them recently announcing an oversubscribed $1.05 Billion bond at 0% interest to buy more bitcoin last week, the potential for large corporate announcements in the weeks and months to come increases by the day.

On the perpetual swap funding rate front, Bitcoin and Ethereum perpetual swaps funding rates are about +30% over their 30-day moving averages. This means that there is strong potential for volatility - mix that in with contract expiration week and we can likely expect some volatility in the coming days.

As always, we'll keep you posted on any relevant news throughout the new year right here and from our Twitter account @hodlwithLedn